Several Oskaloosa boys concluded to have a little outing last Sunday with bycicles (sic), among the number were Alt Buck, Ray Patterson and Curt Patrick, boarding the train on the Northwestern for the Falls, where after riding around for a while on the bycicles, made a stop at the Hillyer House, where they enjoyed the hospitality of that prince of landlords, R.D. Simpson. After partaking of one of his sumptuous dinners, they were taken in charge of Messrs. Piazzek and Tutt, owners of the little steamboat that plys the Delaware above the dam, who extended an invitation for a ride, which the Oskaloosa boys graciously accepted, going up the river about five miles and back. The Cyclone Cadet Band of Valley Falls furnished enlivening music on the trip. Getting back to the hotel about half past 4 o’clock, they immediately started for home feeling grateful for the gentlemanly and courteous treatment received at all hands. About an hour’s ride from the falls, the three arrived at Dunavant where they took supper with Geo. Elston. The boys got safely home at 7:30 being delayed a short time on the road.

This story appeared in “Yesteryears” in October 2002.

Donated Townsite of Grantville and Laid it out.

A.J. [Andrew Jackson] Kleinhans, 90, one of the pioneer farmers and stockmen of Jefferson county, died at his home in Grantville, Tuesday. Death followed a stroke of paralysis which he suffered last Saturday. Mr. Kleinhans was born in Belvidere, N.J., April 25, 1831, and was educated in Belvidere college. He went to California during the gold rush of 1849, coming back to Kansas in 1856. He purchased the farm on which the family now lives, in 1857. The townsite of Grantville was laid out by Mr. Kleinhans and donated to the town's company. The Kleinhans home is one of the finest in Jefferson county.

Mr. Kleinhans was one of the original incorporators of the Bank of Topeka and was one of the close friends of the late John R. Mulvane. In 1856, Mr. Kleinhans married Mary J. Coffman, whose father was also a pioneer resident of Jefferson county. Mrs. Kleinhans survives her husband.

Two sons and two daughters also survive. Charles H. lives at Grantville, John A. resides at 827 Quincy Street. Mrs. W.T. [Della] Crosby, a daughter, is in California with Mr. Crosby, and is now on her way back to Topeka. Mrs. Mattie A. Ingram, another daughter, lives in Calcutta, India, with her son, Everett Ingram, representative of one of the largest rubber concerns in the United States.

Mrs. Crosby will arrive in Topeka in time for the funeral which will be held at Grantville, Thursday. The funeral will be private. — Topeka Daily Capital

This story appeared in “Yesteryears” in April 2003.

Mrs. Mary J. Kleinhans, 87, widow of the late A. Jackson Kleinhans, for seventy-one years a resident of Grantville, died this morning at the family homestead.

During the first term of President U. S. Grant, Mr. Kleinhans founded the town. The neighbors favored naming it Kleinville, but he was a modest man and insisted that it should be named in honor of the President. He donated the land for the Methodist Church, of which his wife was a member, the district school and the railroad station. Mr. Kleinhans died in 1923 at the age of 90.

From The First Hundred Years of Jefferson County, Kansas: 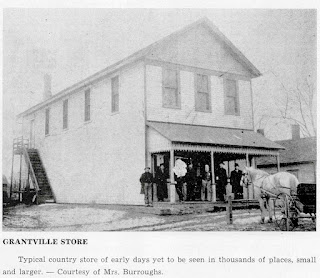 Originally a part of Kentucky township. It was organized in 1858. Settlers of 1854 were Jefferson Riddle, J.T. Wilson, K. Kukendall and R.P. Beeler. A town company was formed in 1857 and a town site of 320 acres was laid off and named Kaw City. A postoffice was established in 1858, on the east side of Big Muddy Creek. When the Kansas Pacific came through the township in 1865 a station was built on the farm of D.W. Kleinhans and called Kaw station. The Kaw City postoffice was moved to the new location, Mr. Kleinhans laid off a town around it, this was the original town of Grantville.

Saturday night the Ozawkie postoffice, location in the Ford Quiett store, was entered and robbed, more than $200 being taken from the postoffice safe.

It is supposed that two men were implicated in the robbery, which occurred about one o’clock. Fred Littlejohn and son were across the street in the Frost residence and stated early Sunday morning that they had noticed the men in the building and had heard the explosion, but didn’t notify any one of the facts because they “didn’t want to get mixed up in the affair.”

The robbery was discovered by people returning home from a country dance. “Shorty” Clark noticed the door was open and tried to close it, but discovered it was out of plumb. He struck a match and noticed the damage done inside and the safe, which had been blown open. He notified others and the sheriff was notified.

The men were traced west of Meriden, and later to Topeka. U.S. postoffice inspectors are working on the case.

Yesteryears
"Yesteryears" is a publication of the Jefferson County (Kansas) Historical Society. Stories from past issues appear in this blog. "Yesteryears" has been published twice a year (April & October) from 1980 to the present. It contains a large amount of history and genealogical information. Contact the JCGS at P.O. Box 174, Oskaloosa, KS 66066-0174. "Yesteryears" editors, past and present: Raymond Riley, Donna Ward, Rose Balao, Richard Wellman, Liz Leech, Jane Hoskinson.